Where to go for a day out in Veneto

The endless opportunities to relax and have fun make the beach resorts of the Northern Adriatic ideal summer holiday destinations. Complementing their unique appeal and popularity are the many attractions in the nearby inland areas, where you can spend incomparable, unforgettable days discovering the wonders of the Veneto region. Why don’t you take a break from the spellbinding seaside to visit the rolling Treviso hills or enjoy the clear air in the stunning Dolomites? There’s something to suit all tastes. Below we’ve put together a few interesting ideas for days out in Veneto.

Days out in Veneto

Treviso and the Conegliano Hills – superb shopping and great wine

It takes just an hour to drive from the coast to Treviso, which is a real treasure trove. The Sile River flows through the town centre, which is filled with historic buildings in the Venetian style. After a pleasant stroll through the old town centre and a look at the amazing shops on Via Calmaggiore, head up to the hills near Conegliano and Pieve di Soligo for an exquisite meal in a traditional osteria, with a delicious glass of DOC Prosecco to complement the divine Veneto cuisine. 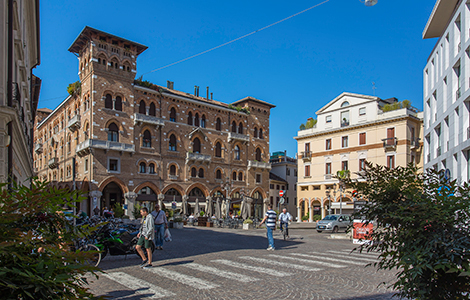 Padua and the University – fascinating history and architecture

As well as its scholarly traditions, the city of Padua is renowned for its exceptional living standards and the warm welcome given to visitors. It is home not only to the second oldest university in Italy but also to the Basilica of Saint Anthony, which attracts countless tourists and worshippers from all over Italy and across the globe every year. Look around the majestic buildings in the town centre, feast your eyes on the magnificent paintings by Giotto in the Scrovegni Chapel and take it easy alongside the locals in Prato della Valle: a breathtaking elliptical square with a host of statues lining a canal that surrounds beautiful lawns. At lunchtime, take your pick from the many trattorie and bacari in the old Jewish Ghetto. 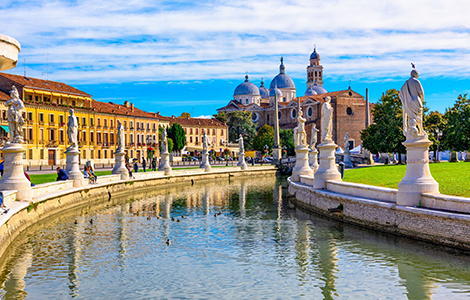 Everyone knows about the wonders of Venice, which is like nowhere else on Earth. However, we’d like to recommend a day out in Veneto that will take you off the beaten track and introduce you to a more authentic side of the city. Forget about Saint Mark’s Square and the Rialto Bridge for a moment and instead take a look around “Castello”, which is one of the six “sestieri” (“districts”) of Venice. It is still entirely inhabited by Venetians and it stretches from Via Garibaldi to the Church of Sant’Elena Imperatrice. You can visit the famous Arsenal and the Biennale in Castello, which is the greenest part of Venice. You could also go on an “island tour” on a boat. It’s a great way to see Venice’s most famous islands: Murano, which is famous for its artisan glass making; picturesque Burano, where you can take countless photos among the colourful houses, narrow streets, canals and little squares; and the more peaceful Torcello, where you will find fertile fields and a Devil’s bridge called the Ponte del Diavolo that leads to the old cathedral and Attila’s Throne. The food served in Torcello’s restaurants is truly exceptional, so make sure you stop to enjoy a traditional seafood dish. If you have time, it’s also worth crossing the wooden bridge from Burano to the little island of Mazzorbo, where you can admire enchanting sunsets over the water of the northern lagoon. 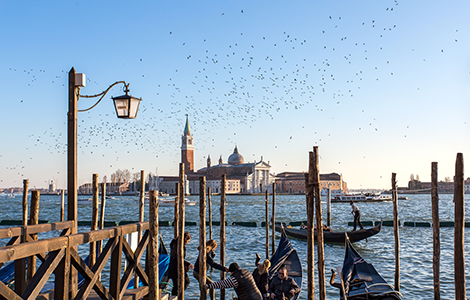 Renowned for the architecture in its old town centre and the numerous cultural events that it hosts, Verona is one of the jewels in the crown of the Veneto region. The Arena is a symbol of the city and every year as many as 20,000 people flock there on summer nights to watch awe-inspiring operas and concerts by top artists. It is the quintessential city of love, as underlined by the fact that you can see Romeo and Juliet’s famous balcony. There are some marvellous bridges and views of the Adige River in the amazing old town centre, which is a UNESCO World Heritage Site. When it comes to eating out, in Verona you’ll be spoilt for choice. There are all sorts of delights on offer both inside and outside the city walls. We recommend “Amarone risotto”. It contains Amarone wine, which can only be made in Valpolicella near Verona. It takes just half an hour to drive to Lake Garda, which is the biggest lake in Italy. Tourists travel from all over the world to visit the picturesque little towns on its shores, such as Desenzano, Peschiera, Sirmione, Lazise and Limone. 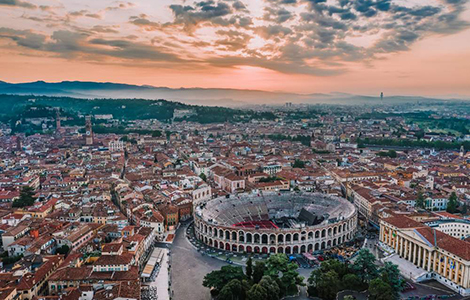 Well-known among 20th century military history buffs due to the large number of war sites and relics that can still be seen today, Bassano is a small city on the Brenta River where you can fill your lungs with the clean air of the mountains and hills. It’s a great destination for a day out. Start your trip by looking around the old town centre and taking tours of the Alpini Museum (dedicated to Italy’s mountain troops) and the Hemingway and First World War Museum. Make sure you take a selfie on the famous Ponte Vecchio: a bridge that was destroyed by bombing in the Second World War and rebuilt in 1948 thanks to a campaign led by the Alpini. By the entrance to the bridge are the Nardini and Poli distilleries, which are internationally renowned as specialist grappa makers. No visit to the city would be complete without a glass of the sublime spirit after some delicious lunch in a trattoria. We would also recommend a look around the Ceramics Museum, which contains local output dating as far back as the 18th century.

We hope that you’ve enjoyed this guide on where to go for a day out in Veneto and that it’s given you some interesting ideas for your next trip! 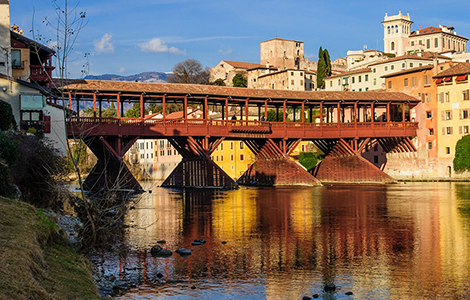 The most awaited show by wine lovers

2 preview evenings before the September festival