Bibione is the ultimate beach and nature resort for tourists in the Northern Adriatic. There are all sorts of reasons to love it, including the crystal-clear sea and the golden sand on the broad beaches, the 30 km of cycle paths, the breathtaking natural environment in the lagoon and the pine woods, and the vast array of sporting, musical, artistic and cultural events. Bibione is also home to a host of traditions and we’d like to tell you about one of the oldest and most widespread types of celebration in Italy. Keep reading to learn more about the Ferragosto fireworks in Bibione. 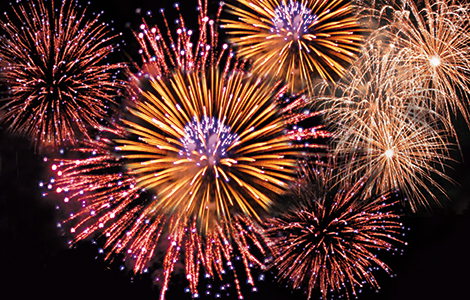 What are the origins of the public holiday known as Ferragosto?

Ferragosto is a public holiday with pagan origins. It is associated with the celebrations to thank the gods for the late summer harvest, which were traditionally held between mid and late August in all of the countries in Southern Europe, including Italy.

The date was made official and the occasion was given its name by the Roman emperor Caesar Augustus. He decided to dedicate the eighth month of the year to himself, naming it August. It is said that he even took a day from February and added it to August so that it would have the same number of days as July, which was dedicated to his predecessor, Julius Caesar. However, he didn’t stop there. He established a festival called Feriae Augusti (“Festival of Augustus”) that was celebrated throughout the empire. The name lives on in contracted form in the modern Italian public holiday of Ferragosto.

Still today, people all over Italy mark Ferragosto on 15 August. It is a time when many Italians are on holiday at the seaside, in the mountains or in the countryside. It is customary to spend a relaxing day with family and friends, grill meat on a barbecue, eat lots of traditional Italian specialities, savour a refreshing slice of melon or watermelon, and then watch the fireworks displays that take place on all of the biggest beaches on the coast in the evening. Making the most of the warm weather, many people end the day in style by going for a midnight swim.

As in many other Catholic countries, 15 August is also the day when the Feast of the Assumption is celebrated in Italy, with religious ceremonies and processions.


Fireworks in Bibione in 2022: what you need to know

The Ferragosto fireworks display in Bibione is free and easily accessible to everyone because it can be seen from Piazzale Zenith and in general all along the beach, from Bibione Centre to Bibione Lido del Sole and Bibione Pineda. Below you can find all of the information you need to organize your Ferragosto celebrations in Bibione and ensure that they’re unforgettable. 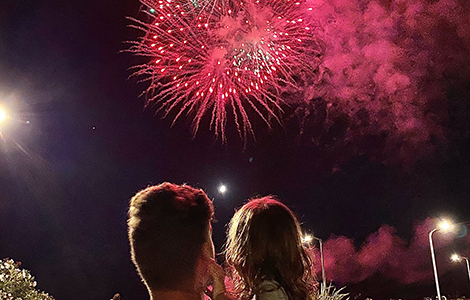 Schedule and where to see the fireworks

– 6:00 pm: Parade through the town featuring the classic cars and motorcycles.

– 9:00 pm: Mass with the Vado musical band at the Church of Santa Maria Assunta with the Bishop in attendance, followed by a torchlight procession down to the sea.

At Largo Hannemann in Bibione Lido del Sole, the celebrations will get underway at 6:00 pm with an aperitif and a DJ set.

If you’d like to know more about where to park your car in Bibione, take a look at our post about it. 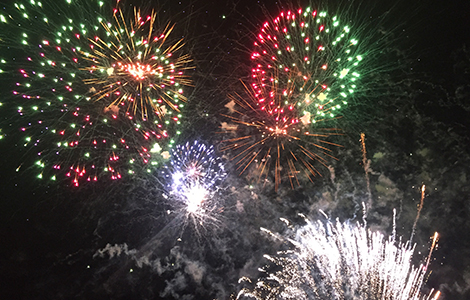 Don’t worry if the weather is bad because the celebrations and the fireworks display will simply be postponed and held the following evening at the same time.

If you’re not coming on holiday until later in the summer and you won’t be here in time to see the Ferragosto fireworks display, then there’s no need to worry!

Bibione wants all of its visitors to be able to enjoy the wonders of the magical, colourful fireworks, so two more events have been organized to ensure that everyone can have an unforgettable summer evening:

If you haven’t booked your summer holiday yet, get in touch with our staff and we’ll help you to organize a stay that’ll give you the chance to watch one of these unmissable displays! 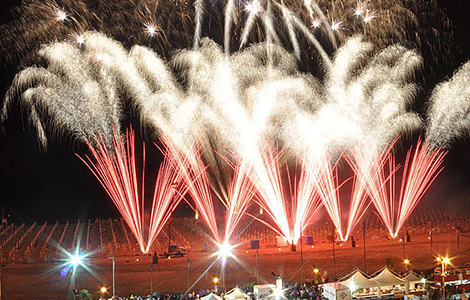