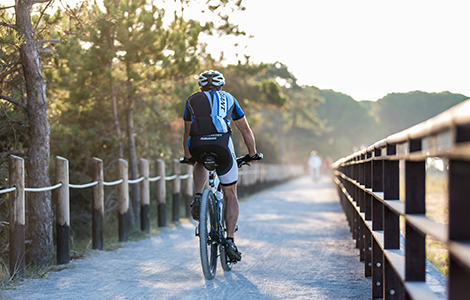 If you’re a keen cyclist who loves spending time in the great outdoors, Bibione is the perfect holiday destination for you.

Why Bibione? It’s a renowned beach resort that has taken an eco-friendly approach to tourism for many years and it never stops striving to cater to the needs of visitors. The local beach was the first in Europe to be registered with the European Eco-Management and Audit Scheme (EMAS) and also the first to go smoke-free (see here for more details). In addition, every year since 1987 Bibione has been awarded a Blue Flag in recognition of its outstanding water quality. Since 2016 it has also held a Green Flag thanks to its child-friendly outlook. Furthermore, recycling schemes are in place on the beach and throughout the town and there is a big emphasis on the world of bicycle touring.

Cycling in Bibione couldn’t be easier. As well as lots of bike rental services, you can also find accommodation with a comprehensive range of facilities for fans of the sport. Most importantly, over the years numerous cycle paths have been built along the most interesting routes in and around the resort. They span 80 km altogether and cover both the town centre and the surrounding area. The cycle paths are all accessible to everyone from adults to youngsters on bikes with stabilizers. There is also plenty to keep more expert riders amused thanks to the wide range of surfaces, which includes concrete, cobbles, block paving, sand and dirt tracks through undergrowth. You can put yourself to the test with a different route every day and enhance your bike handling skills. As you can see, there are all sorts of reasons to go for a bike ride in Bibione! 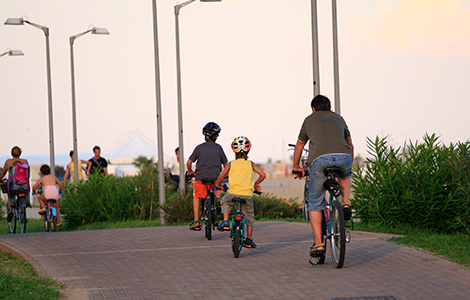 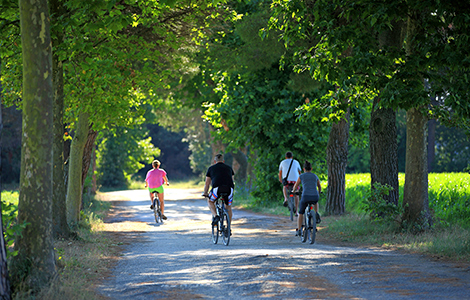 The top, best known route of all is unquestionably the seafront cycle path that is approximately 10 km long and runs alongside the beach all of the way through the resort. There are two reasons why we recommend it. Firstly, it’s the cycle path that’s most open to the sea, so you can take deep breaths of the precious iodine-rich air. Secondly, the light and colours are truly spectacular both early in the morning and at sunset. To the East, it leads to the famous, picturesque Bibione lighthouse, where you can find a charming little beach and natural vegetation swaying in the breeze on the wild sand dunes. It’s a great place for bicycle touring enthusiasts to enjoy the natural surroundings and maybe take a dip in the water.

The lighthouse can also be reached on a 12 km inland route that runs alongside the pine woods. The rich fragrance of the pine trees blends with the scent of the salty sea air and it’s wonderfully cool in the shade of the Austrian pines.

If you’re a real cycling enthusiast, make sure you also explore the area around Bibione. There is a vast network of cycle paths where everyone from newcomers to the sport to expert cyclists will be in heaven.

If you don’t want to travel too far, you can follow routes through the nearby farms or visit Val Grande. If you’re feeling more adventurous, the “Tagliamento” loop of approximately 40 km will take you from Bibione alongside the river of the same name and through the neighbouring countryside. It’s a marvellous way to stay in shape while admiring delightful scenery such as plants growing in the fields and on the river banks.

Bibione to Caorle by bike

From beach to beach: a cycling trip for those who like racing along roads, as well as peaceful country lanes. There isn’t a proper cycle path yet, but real enthusiasts will adore this spellbinding, immensely satisfying trip. Lots of people love travelling from Bibione to Caorle by bike and of course the route can also be followed in the opposite direction. You need to be reasonably fit and feeling adventurous. If you book and pay for tickets in advance, you can take a ferry to Brussa from Porto Baseleghe at the western end of Bibione. From there, follow the country roads to Sindacale. Be careful on the next stage of your journey because you will be on the SP 42, which is a busier road. Continue along the road towards Caorle and turn left after the bridge over the Lemene River. Ride to Marango and then San Gaetano. Be careful on the last few kilometres leading into Caorle because you will be on the SP 59, which is another busy road. On this route, you will go through the peaceful rural landscape of the countryside and get the chance to spot farmhouses, birds such as herons, cranes and multi-coloured European bee-eaters, as well as roe deer if you’re lucky. It’s more tiring than the other routes and there aren’t as many facilities, but it’s a magical way to have an adventurous day out.

This year, work will start on a project to separate motor vehicles from cyclists on Via Baseleghe and add lights to the cycle path. Bibione will be surrounded by safe cycle paths once this final section has been added to the cycling network in the North of the town.

Are you a bicycle touring enthusiast or do you simply like the idea of combining a relaxing break on the beach with some healthy exercise in the great outdoors? If so, Bibione would make a great choice for your next holiday. Download a map of all of the cycling routes in Bibione. 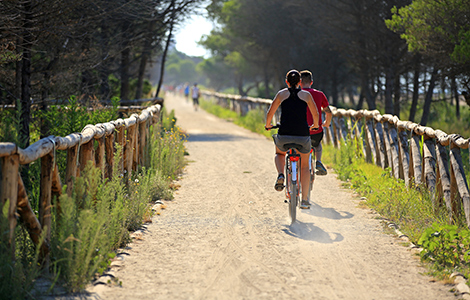