A big part in any summer holiday is played by sun, sea, sand, strolls on the shore and lots of swimming with family or friends.

However, there is also a lot more than that on offer in Veneto. In addition to the outstanding traditional cuisine and inland areas packed with culture, history and beautiful villages that are waiting to be explored, you can also enjoy the unadulterated delights of local traditions and celebrations that will amaze and appeal to young and old alike with their flavours, colours and unique characteristics.

In this article we’d like to tell you all about the two most spectacular and spellbinding celebrations on the North Adriatic coast in the month of July.

Burning the Bell Tower in Caorle

On the second Saturday and Sunday of July every year, Caorle plays host to an age-old seafaring tradition: the Procession of Our Lady of the Angels, during which the statue of the Virgin Mary from the Sanctuary of the Madonna dell’Angelo is carried around the streets of the old town centre. It is an eagerly awaited ritual that sees widespread participation from the people of Caorle, as well as tourists and visitors from nearby towns and villages. Cheerful preparations take place throughout the old town centre as the people get ready to follow the procession, during which the statue is taken from the sanctuary by the sea to the 11th century cathedral of Caorle and back. A the end of the procession, an event known as Burning the Bell Tower takes place in Piazza Vescovado as evening falls. Spectacular lighting and special effects make it look like the bell tower has caught fire before everybody’s eyes. It’s an incredible, truly unmissable sight! As on every other summer evening, all over town there are restaurants, trattorias and bars where you can savour traditional local dishes such as fried fish, spaghetti alla Busara (with scampi and other seafood), queen scallops and “moscardino” (musky octopus). Experience the marvels of Caorle cuisine! 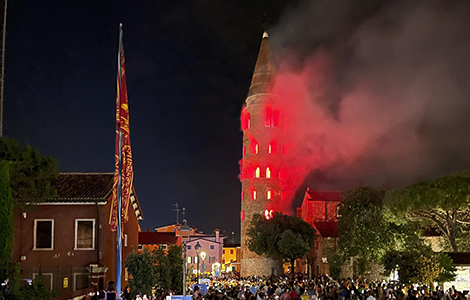 The Festa del Redentore in Venice

The Festa del Redentore (Feast of the Most Holy Redeemer) is very popular among the people of Veneto and it is famous all over Italy due to its spectacular nature and spellbinding setting. It takes place on the third Saturday of July every year right in the heart of Venice, in the San Marco Basin. The feast is held on an annual basis to commemorate and celebrate the end of the plague that devastated the city between 1575 and 1577. To thank the Lord for the end of the plague, the Venetians built a magnificent church on the island of Giudecca, which is known as the Church of the Redentore. Every year, a pontoon bridge is built from Giudecca to the Fondamenta delle Zattere on the opposite shore. As the sun sets on the Saturday evening, boats that are immaculately decorated with colourful balloons, garlands and bright lights start to flock into the San Marco Basin and the Giudecca Canal to watch the show. The people on the boats really know how to party! They have big dinners with plenty of traditional Venetian dishes, such as pasta with beans, sarde in saor (fried sardines with pine kernels, raisins and caramelized onions cooked in vinegar) and bovoetti (snails that live near the sea). They top it all off with lots of slices of fresh watermelon: the quintessential summer fruit. The dazzling fireworks display starts at 11.30 pm and does not finish until well after midnight. It is also possible to take part in the celebrations on dry land, watch the display from the shore and enjoy the celebratory atmosphere that fills the entire city. We recommend a nice stroll along Riva degli Schiavoni, where you can really get into the party mood and relish the music, dancing and lots of great food… Have fun and have a great summer! 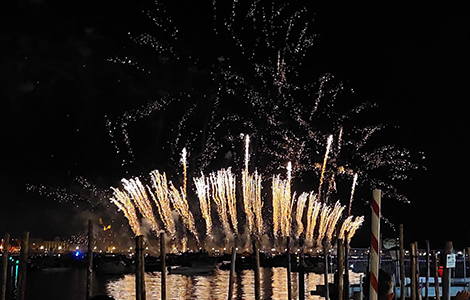